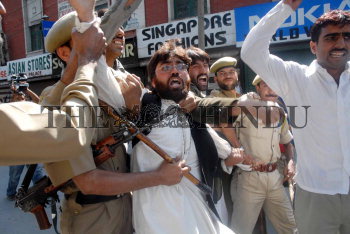 Caption : Police restrict the activists of Jammu and Kashmir Peoples Conference (JKPC) during the demonstration against the scheduled execution of a mastermind, in 2001 Attack on Parliament, in Srinagar on September 29, 2006. Police in revolt-hit Kashmir fired teargas to maintain law and order. The protest came a day after judge told authorities to hang Mohammed Afzal, a Kashmiri militant, on October 20 at New Delhi's Tihar Jail. Photo: Nissar Ahmad