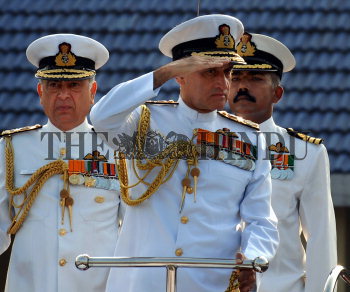 Caption : Chief of Naval Staff Admiral Arun Prakash taking salute at a ceremonial parade to bid him farewell by Eastern Naval Command at the Naval Base in Visakhapatnam on September 28, 2006, as Vice-Admiral Suresh Mehta, who will succeed, looks on. Photo: K.R. Deepak