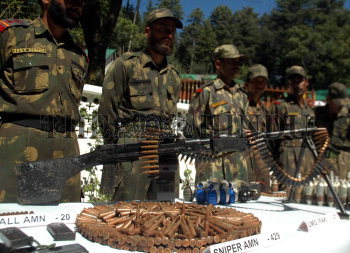 Caption : Army soldiers display arms and ammunition at an army camp at Kupwara, some 102 km north of Srinagar, on September 28, 2006. During the search operations troops recovered three caches of arms, ammunition and communication equipments from areas near The Line of Control (LOC). Photo: Nissar Ahmad