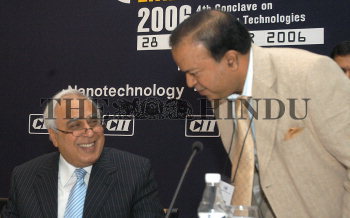 Caption : Minister of Science and Technology, Kapil Sibal along with Chairman Confederation of Indian Industries, Northern Region, Adesh Gupta at the Emergetech Conclave on Nanotechnology and Wireless Technology, in New Delhi on September 28, 2006. Photo: Ramesh Sharma