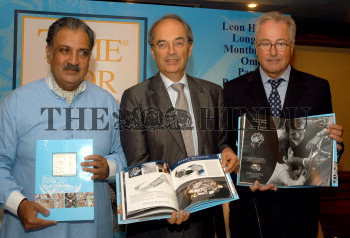 Caption : NEW DELHI: His Highness Maharaja Gajsingh II (left) - Marwar - Jodhpur along with Mr. Dominique Dreyer, Ambassador of Switzerland to India (center) and the author Mr. Heinz Heimann during the launch of coffee-table book titled 'Time for India' (launched in India jointly by Time for SA and Watch Market Review) at a function in New Delhi on September 28, 2006. Photo: Shanker Chakravarty