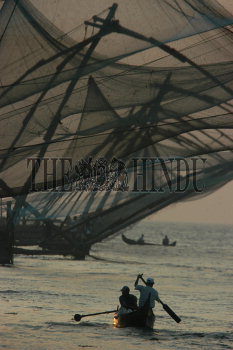 Caption : Fishermen venture into the sea from Kerala's Fort Kochi beach and recent global assessment by the Food and Agriculture Organization reveal that of the 600 species groups of wild fish stock it monitored, 52 per cent were considered fully exploited,17 per cent over exploited, 7 per cent depleted, 1 per cent recovering from depletion, 20 per cent moderately exploited and 3 per cent under exploited. Photo: K. K. Mustafah 28/09/2006