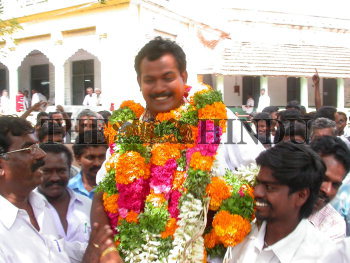 Caption : TIRUNELVELI: The MDMK candidate for Ward No. 14 of Tirunelveli Corporation, Arulvin being taken out in procession by his supporters after he filed his nomination at Palayamkottai Zone Office on September 27, 2006. Photo: A. Shaikmohideen