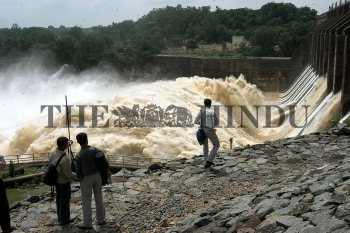 Caption : KOLKATA: The excess water of river Damodar has been released towards West Bengal from the Maithon Dam on September 27, 2006. The recent rain has flooded several districts of the State and still suffering with the excess water released from overflown river like Damodar which has flooded atleast four districts. Photo: Arunangsu Roy Chowdhury