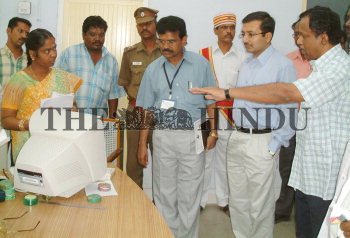 Caption : TIRUCHI: The election observer for Tiruchi district P.Sonai (middle) inspecting the registration of filing of nominations for the elections to the Tiruchi Corporation on September 27, 2006. Collector Ashish Vachhani (second from right) and the Corporation Commissioner B.Balachandran (extreme right) are also seen. Photo: R. M. Rajarathinam