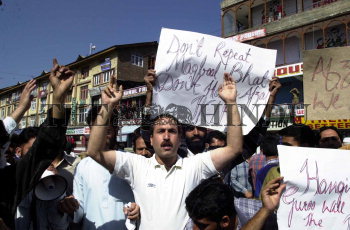 Caption : Jammu and Kashmir Liberation Front (JKLF) Chairman Yasin Malik (C) along with activists of the front takes part in a demonstration against the scheduled execution of a mastermind who attacked Parliament in 2001 in Srinagar on September 27, 2006. Police in revolt-hit Kashmir fired teargas to break up a protest against orders to execute him after a month. The protest came a day after judge told authorities to hang Mohammed Afzal, a Kashmiri, on October 20, 2006 at New Delhi's Tihar Jail over the attack that brought nuclear-armed India and Pakistan close to war. Photo: Nissar Ahmad