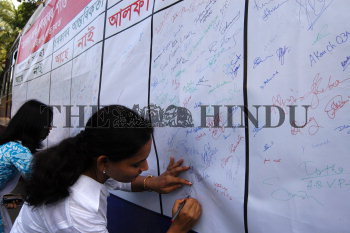 Caption : Girls taking part in a signature campaign on the ongoing issue of peace talk with the United Liberation Front of Asom (ULFA), organised by a NGO called Assom Public Works in Guwahati on September 26, 2006. The NGS is planning to collect ten lakh signatures from the common people of Assam state to know their views about ULFA. Army has again launched operations against ULFA militants in Assam from September 23, 2006 and killed two ULFA militants in Tinsukia district of Assam on September 24, 2006. Photo: Ritu Raj Konwar