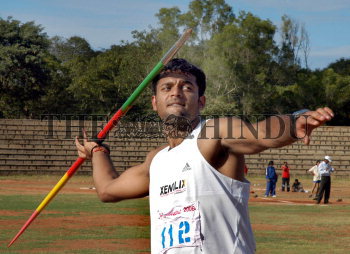 Caption : MYSORE: R. Shantaraj of Bangalore City Sports Hostel seen in action during his record-breaking effort in the javelin throw event on the opening day of the State-level Dasara Games at the Chamundivihar Sports complex in Mysore on September 26, 2006. Photo: M.A. Sriram