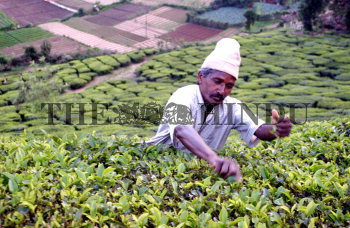 Caption : A worker plucking tea leaves at a plantation near Devikulam in Kerala. Kochi topped among the south Indian tea auction centres in volumes, recording 49.54 per cent of total sales volume, followed by 34.18 per cent from Coonoor and 16.28 per cent from Coimbatore. The city was also way ahead in realising an average price of Rs. 49.90 per kg. South Indian tea production increased by 35.7 per cent to 227 mkg. Photo: K. K. Mustafah 26/09/2006