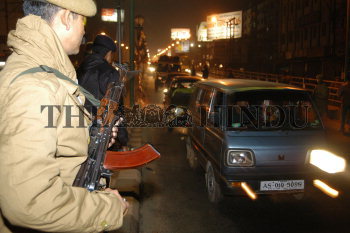 Caption : Security personnel keep up vigil in the streets of Guwahati on September 25, 2006. Army has launched operations against the United Liberation Front of Asom (ULFA) militants from September 23, 2006Two ULFA militants were killed during operation in Digboi area under Tingiri police station in Tinsukia district of Assam on September 24, 2006. India formally called off a ceasefire on September 24, 2006 with a dominant separatist group in the restive northeast state of Assam and resumed military operations after renewed attacks by the rebels. In New Delhi, the army said it was rushing troops to suspected strongholds of the outlawed United Liberation Front of Asom (ULFA) in oil and timber-rich Assam following the ceasefire's expiry. Photo: Ritu Raj Konwar