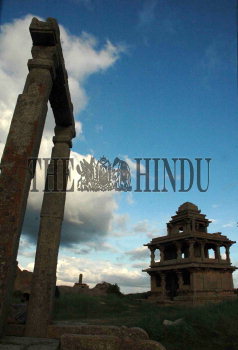 Caption : Frozen in time: A view of Kallina Kote, which has become one of favourite haunts for heritage tourists in Chitradurga village in Karnataka. The fort was built in parts by the Palegar Nayakas, Hyder Ali and Tipu Sultan. It comprises of a series of seven enclosure walls. Eighteen ancient temples can be found inside the fort. The fort has 19 gateways, 38 posterior entrances, a palace, a mosque, granaries, oil pits, four secret entrances and water tanks. Photo: H. Vibhu 22-09-2006