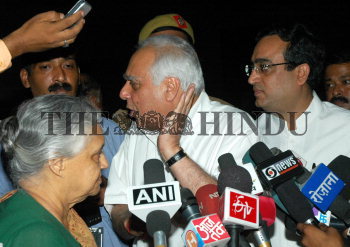 Caption : Kapil Sibal, Minister of State for Science and Technology flanked by Delhi Chief Minister Sheila Dikshit and Minister of State for Urban Development Ajay Maken (right), addressing the media, after a meeting with the Home Minister Shivraj Patil, in New Delhi, on September 21, 2006, over the sealing of shops in residencial area by the Municipal Corporation of Delhi (MCD). Photo: Rajeev Bhatt