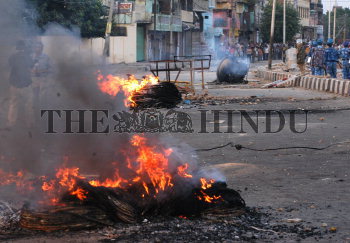 Caption : Bonfires by rioteers who resorted to stoning on police personnel during a bandh at Seelampur, in New Delhi, on September 20, 2006, organised in protest against the sealing of shops by the Municipal Corporation of Delhi. Photo: V.V. Krishnan