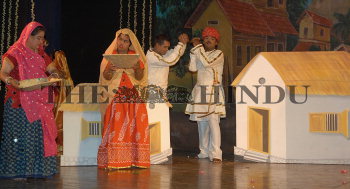 Caption : Special Children of RASA, a non-Governmental organisation performing a show in theatre in the form of music and dance portraying the 'Nava Vidha Bakthi' (Nine forms of Devotion), at the Narada Gana Sabha, in Chennai on September 20, 2006. Photo: S.R. Raghunathan