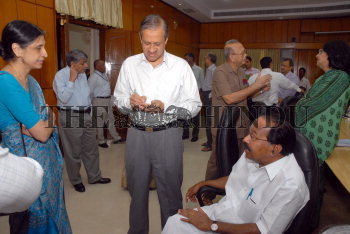 Caption : ADMINISTRATIVE REFORMS COMMISSION Chairman M. Veerappa Moily (seated) and members called on the Chief Minister H.D. Kumraswamy (not in the picture) and held a meeting with him and other Government officials. Here they are having an informal meeting with the State Government officials while waiting for the Chief Minister to come, in Bangalore, on September 19, 2006. Photo: K. Gopinathan