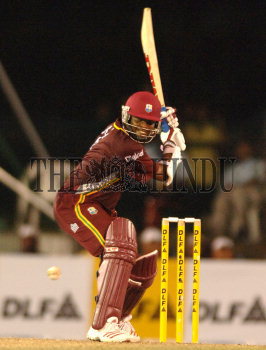 Caption : KUALA LUMPUR: West Indian skipper Brian Lara about to play a shot off the bowling of Stuart Clark (not in pic) in the DLF Cup triangular series one day international cricket match between Australia and West Indies in Kuala Lumpur on September 18, 2006. Photo: S. Subramanium