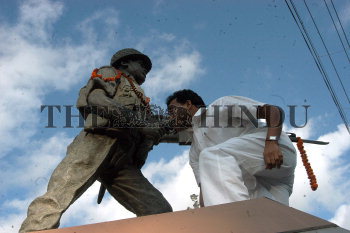 Caption : Mr. Madhu Koda, Chief Minister of JHARKHAND at the Albert Ekka Chowk, the central point of Ranchi city to pay the homage to the statue of Albert Ekka after taking oath on September 18, 2006. Albert Ekka of JHARKHAND was a soldier in Indian Army, died in the war of India and Pakistan in 1972. Photo: Arunangsu Roy Chowdhury