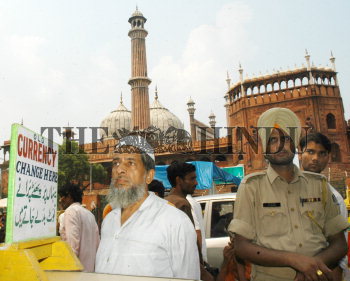 Caption : NEW DELHI:: A CRPF personnel and bystanders keep a watch on the television sets for the cricket scores around the main gate of Jama Masjid during the prayer time as life was normal following clashes between two groups on September 15, 2006. Indian Muslim leaders and political parties have demanded an apology from Pope Benedict XVI for his remarks implicitly linking violence and Islam. The chief cleric of Jama Masjid mosque said the comments were a deliberate attempt to hurt the feelings of Muslims worldwide. . Photo: V.V.Krishnan 16-09-2006