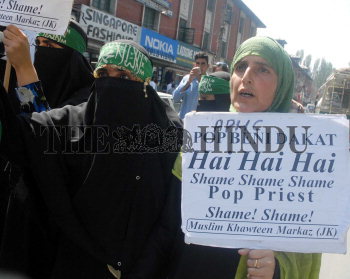 Caption : Veiled Kashmiri activists from the Muslim Khawateen Markaz shouting slogans against the Pope Benedict XVI during a protest at Lal Chowk, in Srinagar on September 16, 2006. Pope Benedict XVI's attack on Islam has stirred anger in India with the head of the National Commission for Minorities saying he sounded like a medieval crusader. Pope Benedict's COMMENTS on September 12, 2006 that ' jihad', a term used by Islamic extremists to justify acts of terror,created an uproar worldwide. Photo: Nissar Ahmad