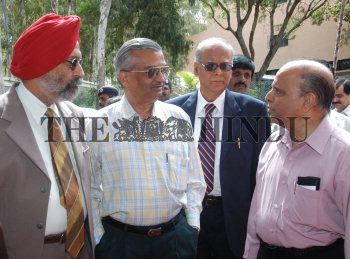 Caption : BANGALORE: Dr. Anil Kakodkar (2nd left), Chairman, Atomic Energy Commission and Secretary to the Government of India, Department of Atomic Energy with Dr. Kasturirangan (right), MP and Director, National Institute of Advanced Studies, at the inauguration of Radiation Emergency Response Centre (ERC) of the Atomic Minerals Directorate for Exploration and Research (AMD), Southern Region, in Bangalore on September 13, 2006. The Bangalore Centre is one of the 18 such centres being set up by Bhabha Atomic Research Centre (BARC), as part of a 10th Plan project of the Department of Atomic Energy to establish a countrywide network of such radiation ERCs. Karnataka Director General of Police B.S. Sial (left) and Dr. Anjan Chaki, Director, AMD (2nd right), looks on. Photo: K Murali Kumar.