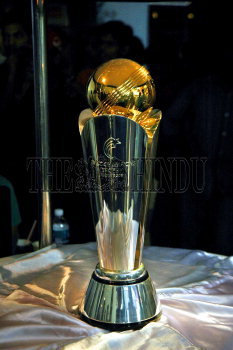 Caption : HYDERABAD: Hutch cellular service provider brought the International Cricket Council (ICC) Champions trophy 2006 to Hyderabad on September 12, 2006. The ICC trophy was showcased at Prasad's Imax theatre for sometime which gave cricket fans an opportunity to see the 18 inches tall trophy which measures 5.5 inches at its widest point and weighs eight kilograms. It is crafted of solid silver, and has a gilt cricket ball engraved with a world map on it . Its value is about 20,000 US dollars ( approximately 9.2 lakhs Indian rupees). Photo: Mohammed Yousuf