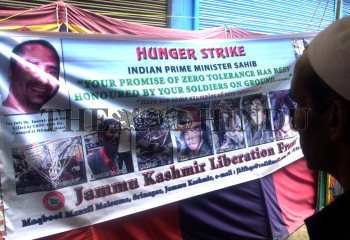 Caption : An old Kashmiri watching a hoarding which quotes the Prime Minister's words of assurance of zero tolerance in the cases of human rights violations, during a one day hunger strike against custodial killings in Srinagar, on September 12, 2006. The strike has been called in protest against human rights abuses across the state. Malik and hundreds of Kashmiri Muslims went on a one-day hunger strike in order to remind Prime Minister Manmohan Singh of his promise of zero tolerance on human rights violations. Photo: Nissar Ahmad