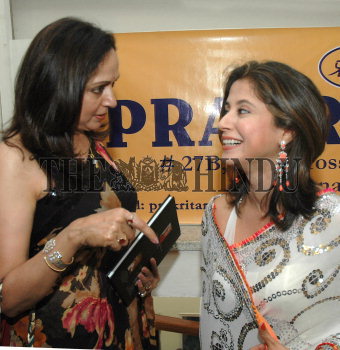 Caption : Film actress Hema Malini and Urmila Matondkar at the Lalit Kala Academy in New Delhi on September 07, 2006. Hema Malini inaugurated a painting exhibition "Naam Roop- a tribute to the divine", by Arpana Caur and Shailendra Gulati and Urmila did it for M.F.Husain's Hundred Painting series "Our Planet Called Earth". Photo: Rajeev Bhatt