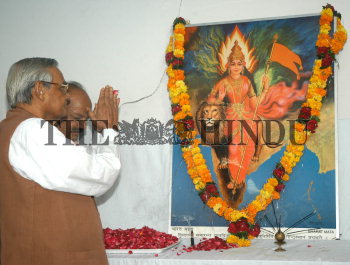 Caption : Former Indian Prime Minister Atal Bihari Vajpayee paying respects to 'Bharat Matha' at a function held at the BJP headquarters, in New Delhi, on September 07, 2006, to mark the centenary celebration of National Song "Vande Mataram". Vande Mataram, a song to salute the nation became a great inspiration for freedom fighers. It was recited by the founders of Indian National Congress including Rabindranath Tagore in the presence of A.O. Hume, an Englishman in late 1896 at the Calcutta session of the Congress. It was adopted by Congress officially on September 07,1905, in the Lahore session of the Congress under the leadership of Pandit Jawaharlal Nehru. Photo: V.V.Krishnan