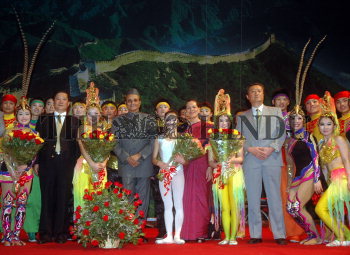 Caption : Congress President Sonia Gandhi along with Indian Council for Cultural Relations Chairman Dr Karan Singh, Chinese Ambassador Sun Xuxi and others with the members of the Beijing Acrobatic Troupe after their performance as part of the 2006 India-China Friendship Year in New Delhi on September 06, 2006. The artistes used a combination of colourful costumes and death-defying skills to woo the audience. Photo: Sandeep Saxena