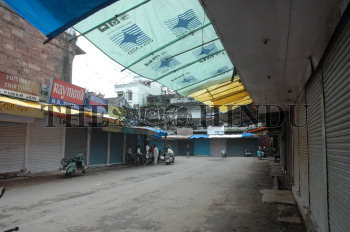 Caption : Shopkeepers downed their shutters in Bhopal on September 05, 2006, as part of the State-wide bandh called by Madhya Pradesh Congress, in protest against the alleged murder of Prof. H.S. Sabharwal, by ABVP, in Ujjain during the student's council poll. Photo: A.M. Faruqui