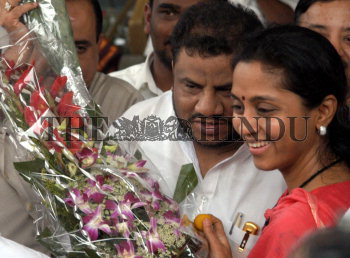 Caption : Supriya Sule, DAUGHTER of NCP chief Sharad Pawar being greeted by party workers at Vidhan Bhavan in Mumbai on September 5, 2006 after filing her nomination for the September 18, 2006 Rajya Sabha bypolls at the State Assembly. The elections were necessitated following the death of NCP MP, Vasant Chavan on July 11,2006. Photo: Paul Noronha