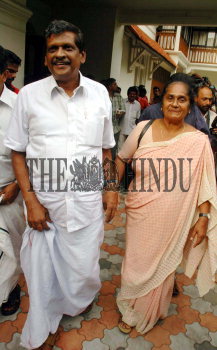 Caption : The Kerala Congress(J) leader and PWD Minister, P.J.Joseph and his wife Dr.Santha leaving the Cliff House, the official residence of the Chief Minister, after the formersubmitted his resignation letter to V.S.Achuthanandan on September 4, 2006, in the wake of misbehaviour with women co-passenger in the flight. Photo: S. Gopakumar.