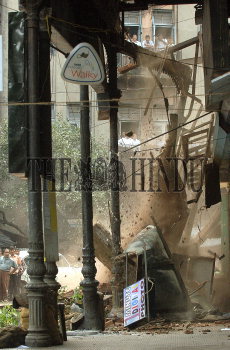 Caption : The Īvarandaā (Balcony) of an age-old building opposite city civil court at Dalhousie area in Kolkata collapsed partly on September 04, 2006 morning, injuring four people. Later, the officials of Municipal Corporation of Kolkata, police and fire brigade reached the spot and demolished the balcony. Dalhousie Square of Kolkata has been identified as world heritage spot and has many such century old buildings, which are in bad condition. Photo: Arunangsu Roy Chowdhury