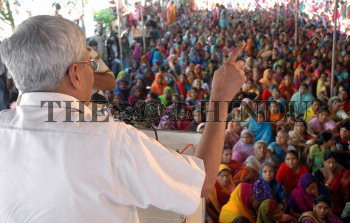 Caption : General Secretary of the Communist Party of India (Marxist) Prakash Karat addressing a public meeting at Budhwara in Bhopal on September 03, 2006 as part of nationwide awareness campaign of the party on its alternative policies. Photo: A.M. Faruqui