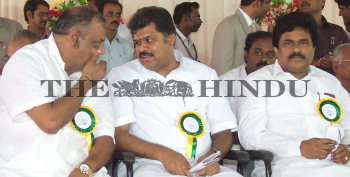 Caption : Union Minister of State for Statistics and Project Implemenation, G. K. Vasan (centre), having a word with the chairman of Sudharsan Polytechnic College, V. K. Sundaram at the inauguration of the polytechnic at Sathiamangalam, in Pudukottai district on September 02, 2006. The Rajya Sabha MP, Su.Thirunavukkarasar (right), looks on. Photo: R. Ashok