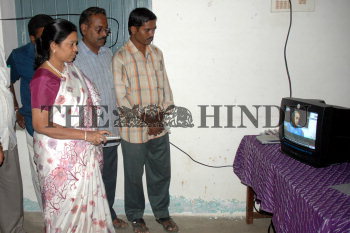 Caption : District Collector R. Vasuki inspecting the colour television sets to be given to residents of Samathuvapuram, as part of fulfilling the DMK Government's election manifesto, at Dindigul union office, in Dindigul on September 01, 2006. Photo: G. Karthikeyan