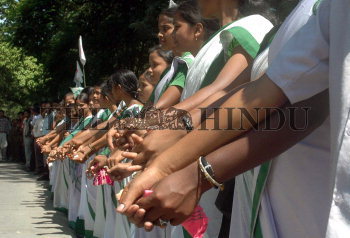 Caption : Members of All Assam Students Union (AASU) making a human chain in protest against the influx of illegal Bangladeshis inside the Kaziranga National Park at Kaziranga on August 31, 2006. There are reports in several newspapers that Islamic fundamentalists have entered into Kaziranga National Park and set up camps inside the park. There are more than two thousand unauthorised people still living inside the park illegally. Despite forest departmentâs continuous efforts, Assam government is unable to shift those people from inside the park. Photo: Ritu Raj Konwar