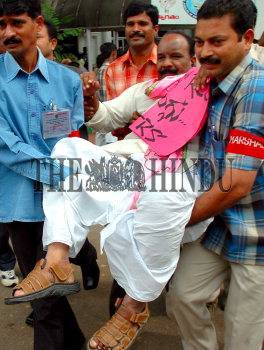 Caption : Telengana Rashtra Samithi (TRS) legislator N. Narasimha Reddy being bodily lifted and taken away by marshals from the House on August 30, 2006, after they were suspended for the third day in a row. The MLAs later staged a sit in, in front of Gate - 2, preventing others from going inside. Photo: Mohammed Yousuf