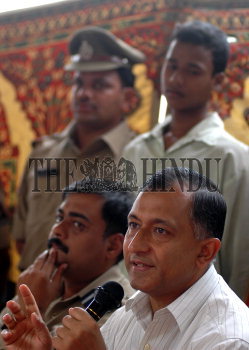 Caption : Additional Commissioner, Crime, Rajiv Trivedi and DCP, Amir Garg producing Hemanth, a 15-year-old servant who killed an elderly woman Swarnalatha at her Banjara Hills house on August 28 before media after he was arrested by Banjara Hills police in Hyderabad on August 29, 2006. Hemanth, a native of Orissa, migrated to Hyderabad for livelihood. Photo: Mohammed Yousuf