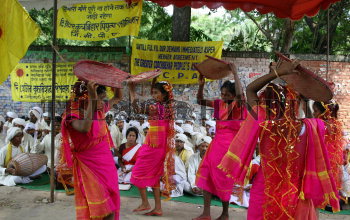 Caption : Members of the Greater Cooch Behar People's Association performing a traditional dance during a dharna at Jantar Mantar, in New Delhi, on August 28, 2006, demanding a care-taker Ministry for administration of Greater Cooch Behar State, which is recognised as a 'C' category State in the Constitution of India adopted on November 26,1949. Photo: Shiv Kumar Pushpakar