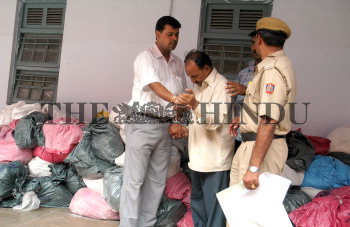 Caption : Vinod Sharma, (centre) who was arrested by the Delhi Police along with the catch of 4400 kgs of narcotic drugs worth 200 crores, at the Kalkaji Police Station in New Delhi on August 28, 2006. Photo: S. Subramanium.