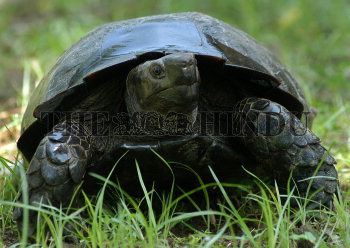 Caption : An endangered fifteen kg giant Eastern Hill Tortoise (Geochelone Emys) in Guwahati Zoo on August 27, 2006. Forest officials of Marruacherra bit office rescued this endangered tortoise when it was brought to a local market called Maniarkhal for sale in Cachar district of Assam. Eastern Hill Tortoise is the largest Asian hill tortoise and found only in East India and South East Asia. The zoo and forest officials have very little knowledge about its behavior to keep this animal in captivity as this species is very rarely seen in wild in this part of northeast India. Photo: Ritu Raj Konwar