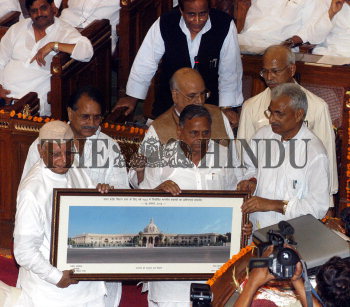 Caption : Chief minister Mulayam Singh Yadav along with leader of opposition Lalji Tandon and speaker of the house Mata Prasad honouring Narain Dutt Tewari Chief minister of Uttrakhand during a felicitation of members of first assembly in the Vidhan Sabha in Lucknow on August 25, 2006. Photo: Subir Roy