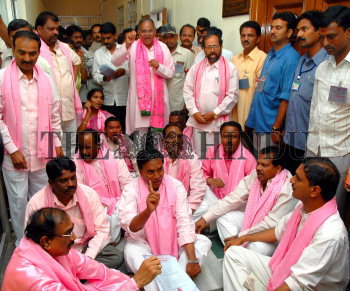 Caption : TELENGANA Rashtra Samithi legislators sit in infront of speaker K.R. Suresh Reddy's chamber in the Legislative Assembly in Hyderabad after the House was adjourned on August 25, 2006. They were demanding that the Assembly should adopt a resolution on carving out a separate TELENGANA State. Photo: Mohammed Yousuf