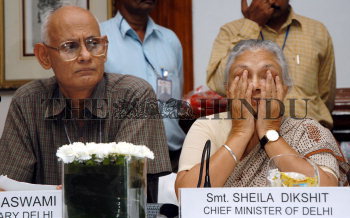 Caption : Chief Minister of Delhi, Sheila Dikshit with Chief Secretary Narayanaswamy at the signing of an MOU between Delhi and Haryana to set up a power plant in Haryana with the partnership of National Thermal Power Corporation (NTPC) in New Delhi on August 25, 2006. Photo: V.V. Krishnan