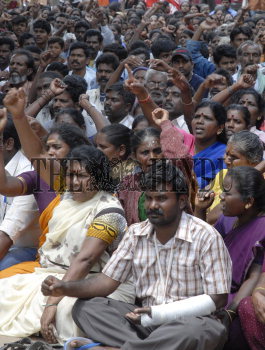 Caption : Members of Dalit Sangharsha Samithi staging a protest in front of District Collector's office, shouting slogans against Police, who lathicharged them on August 24 while they took out a rally against clearance of slums, near Ragi Gudd in Bangalore on August 25, 2006. Photo: K. Bhagya Prakash