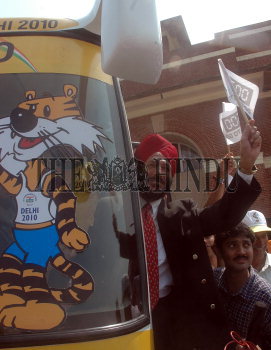 Caption : Legendary sportsperson Milka Singh (left) seen during the flagging off of the "Countdown Bus" at the National Stadium in New Delhi on August 25, 2006 to mark the countdown to Delhi Commonwealth Games 2010, now 1500 days away. Photo: Sandeep Saxena