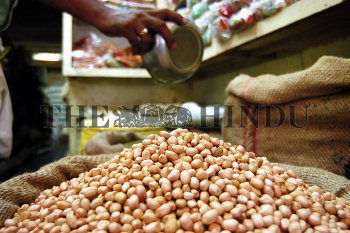 Caption : Groundnut being packed at a shop in Thrissur, Kerala. Kharif OIL SEEDs acreage in the country is reported to go down by over 10 Ih and much of this on account of the reduction of acreage under groundnut from 53.54 Ih on 2005-06 to 43.23 Ih in 2006-07. The draught conditions in the northern states and the farmers shifting to cotton from groundnut could be cited as reasons. Photo: K.K. Mustafah 25/08/06