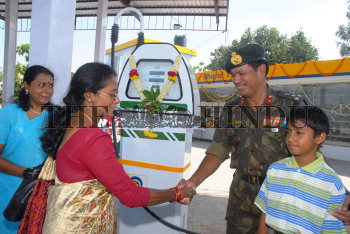 Caption : Brigadier Clement Samuel, Commander of Karnataka and Kerala Sub Area handing over the petrol pump at Kasturinagar, Bangalore on August 25, 2006, to Padma Sangli (2nd left), wife of late Major Ashok Sangli who was killed in an encounter with the terrorists at Poonch District in Jammu and Kashmir. Photo: K. Gopinathan