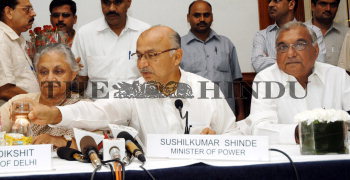 Caption : Union Minister for Power, Sushilkumar Shinde, flanked by Delhi Chief Minister, Sheila Dikshit, and Haryana Chief Minister, Bhupinder Singh Hooda, at the signing of an MoU between the two neighbouring states to set up a Power Plant in Haryana with the partnership of NTPC, in New Delhi on August 24, 2006. Photo: V.V. Krishnan